It’s roughly four weeks until harvest starts in earnest. We will then truly get a good indication of how much the crop has fallen since the ABARES report in September due to frost and continued dryness. In the US, delays to harvest are causing concerns with Jack Frost on his way to their northern crops.

Over the past week, the ASX market has traded marginally higher (+A$1.5). The trading range has been narrower than the Moffat Star hotel (see link), with a range of A$356.50 to A$358.50.  We are only four weeks away from the bulk of harvesting commencing, and volatility is likely to return when the crop starts to get reaped. 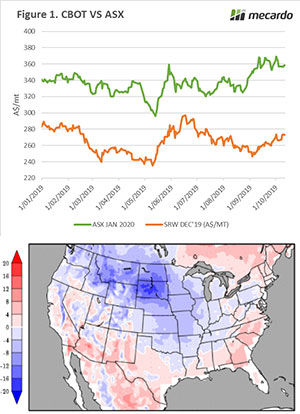 Whilst ASX has largely flatlined, the December wheat contract has gained some ground. Week on week the contract is up A$6.

A plethora of trade analysts are expecting both the corn and wheat balance sheet to be trimmed in the overnight WASDE* report. This has resulted in gains this week, which are welcome news for producers. It must be noted that trade analysts also predicted bearish reports in July, August & September.

Another factor contributing to the improving pricing scenario for US futures (Corn, wheat and beans) is forecasts of poor weather (see map). Our regular readers will be aware of the poor planting conditions which lead to delays. The delayed planting is leading to delayed reaping, which with cold weather on the way is at risk of being damaged by frost (and snow).

*This week’s weekly comment was written prior to the release of the WASDE. My thoughts on the report will be included in the Commodity Conversation podcast.

We expect that Australian production will be revised down from 19mmt to 18mmt, to reflect the poorer conditions since the start of September.

It will be interesting to see if there is any damage caused by this cold snap in the northern states, as this could provide the impetus for a further increase in overseas futures.