ESTLI back through 700¢ but only catching OTH Lamb prices have had another positive week, with the Eastern States Trade Lamb Indicator (ESTLI) heading towards Easter above 700¢. As outlined earlier in the week, this could just be the start of bigger things to come. 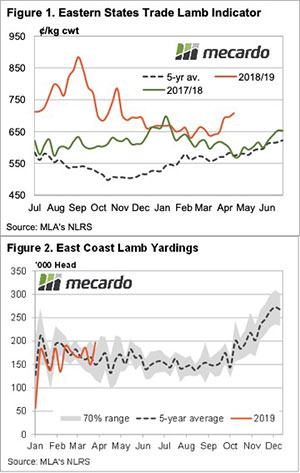 It’s hard to get too excited by the ESTLI breaking through 700¢ since November. Over the hooks (OTH) prices have been above 700¢ for much of the first three months of the year and the saleyards have taken plenty of time to catch up. The unexpected strong supplies have kept a lid on saleyard prices as processors generally have gotten their fill direct.

With the release of yardings data for the week of the fourth, we can see why prices steadied last week. Figure 2 shows East Coast Lamb yardings hitting their highest level for the year, just shy of 200,000 head. The rapid price rise of the previous week no doubt drew out remaining good lambs, but things might have tightened a bit this week.

Lamb prices rallied in the west too. The WA Trade Lamb Indicator gained 20¢ this week to hit 674¢/kg cwt, the highest price since the first week of the year. WA mutton is lagging the east coast, sitting at 438¢, while the east coast is on 509¢/kg cwt.

Sheep yardings were also higher on the east coast last week and this might have continued this week.  No doubt those still waiting for rain are finding 500¢ mutton very attractive.

There is little rain on the forecast on the east coast but it looks like autumn might kick off for parts of WA this week. We are also in for a couple of short weeks which can work for or against the market depending on how supplies are tracking. There are reportedly still plenty of lambs booked up, so don’t expect strong rallies for lambs this week, but after Easter things will be interesting.