EU wheat at a discount

In this week’s grain market update we take a look at the new crop contracts overseas now that we’re approaching the northern hemisphere harvest. 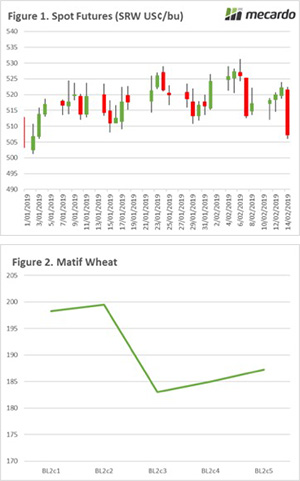 The Chicago wheat futures show some small gains at the start of the week, however overnight lost all of the weeks gains (and then some). The contract ended the week down 2%, or A$5 (Figure 1). This was due to US wheat exports for early January being lower than expected.

As we get close to the northern hemisphere harvest, the reliance on old crop starts to diminish as exports will start from the new pile.

This can be seen in the forward curve for Matif which is currently in backwardation (Figure 2). In a market experiencing backwardation, the forward future months will be priced at a discount to the spot futures market. A market in backwardation suggests that supplies are currently short, and buyers want the commodity now as opposed to the future. In essence this encourages sellers with stocks to sell now rather than hold, as the commodity is discounted in forward contract period.

It is still early but European and North American weather looks favourable to the crop, therefore the trade expects to see better production for the coming crop. This means there is less requirement (at present) to pay large premiums.


The BOM have released their 3 month climate outlook (Mar-May) with the majority of Australian growing regions forecast to receive median rainfall. Although long range forecasts need to be taken with a pinch of salt, it is positive compared to prior predications.