This week sees the first permit for the importation of wheat into Australia since 2007. This has caused a great degree of consternation with producers in the eastern states. But has it had any impact on prices?

The import of wheat into Australia has the potential to cause two issues to grain producers:

There is a concern that the importation of grain could bring foreign diseases or pests which are not currently an issue to Australian producers. There is the potential for large losses to production caused by these pests.

2. Economic
At times there will be the potential to import grain from overseas cheaper than buying domestically, especially in times of drought. Hypothetically the importation of overseas grain would place a ceiling on the domestic price of grain.

At present, the numbers don’t stack up for imports into Australia from any other origins, due to the post-harvest fall in pricing and cheaper options from Western Australia. Nonetheless, this permit approval potentially sets a precedent for future import programs in the event of a drought. 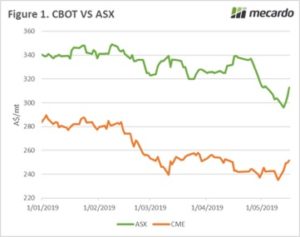 The rise in Australia is mirroring the rise in the US, as they struggle to plant their crop due to the recent rains they have experienced. Although prices have risen in Australia, it is not due to the vessel.

The impact of wheat imports of this scale (and time) are negligible from a pricing point of view.

The single vessel import permit for Manildra will have limited impact upon the market in its current form. However, if future perpetual permits were issued there is a likelihood of import parity becoming a more realistic issue in times of drought.

In an average year, importation will not be a feasible enterprise for grain consumers.