IGC numbers out but no surprises

The International Grains Council (IGC) released their June projections last night, with the changes in production largely expected.  The IGC might have disappointed a little on the corn and soybean front, with prices easing, while wheat stayed at its peak despite growing production.

The headline numbers out of the IGC Grain Market Report were a 2% reduction in forecasted corn production in 19/20.  The year on year fall in corn production is expected to be 3%.  There was little movement in corn markets last night, with CME Corn losing a little ground. 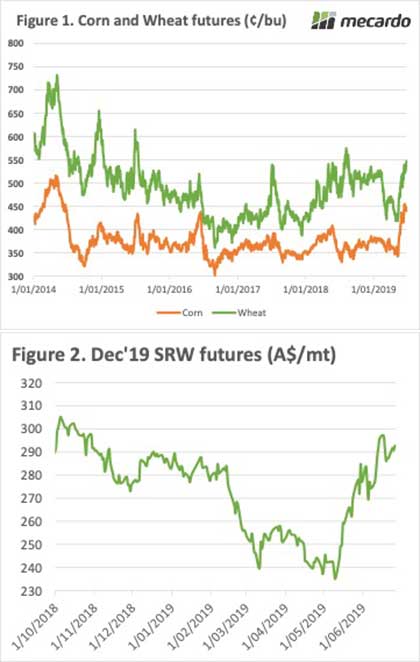 The IGC also cut soybean production for the coming season.  Soybeans were pegged 3.5% lower than the last projection, and 3.8% lower than last year.  Again, the declines in world production was largely expected, with soybean futures also easing marginally.

The IGC raised their wheat production forecast marginally, which took the year on year rise to 5%.  The wheat market ignored the increased production, and the falls in corn and soybeans to remain steady.  Recent dry weather concerns in Europe and the Black Sea regions have not been taken into account in the IGC forecasts, and the market is factoring in some weakening in production.

Figure 1 shows CBOT wheat and corn futures, and both are coming up against resistance at 550 and 450¢/bu respectively.  Given the still heavy supply forecasts for wheat it’s hard to see it gaining too much more ground without some serious cuts in production.

CBOT wheat is also finding some support from a slow harvest.  To last Sunday just 15% of US winter wheat was harvested.  This was well behind last year, and the five year average, of 39% and 34% respectively.

There is more rain forecast for the US this week, so harvest is likely to remain slow, and support for prices continue.  The higher AUD this week has taken some of the shine of swap pricing, with figure 2 showing it’s not quite back at highs.  Even though it’s not at $300, swaps still look reasonably attractive.  A slow harvest in the US doesn’t mean the grain isn’t there, it might be downgraded, but should still see some harvest pressure when it dries out enough.