Lamb and mutton forecasts to 2022

Last week we updated the forecast model for annual young cattle prices to 2022 and this week it is the sheep producers turn to get an insight as to what the Mecardo model for the Eastern States Trade Lamb Indicator (ESTLI) and National Mutton Indicator (NMI) indicates for price projections over the next few years. 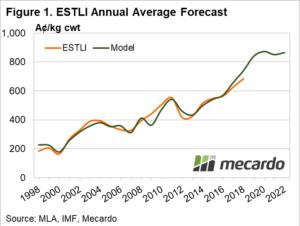 The Mecardo ESTLI model predicts lamb prices to remain above 800¢ for the next few seasons as growth in offshore demand continues to outweigh increasing lamb slaughter and production levels (Figure 1). The 2020 season is anticipated to see an annual average ESTLI of 874¢, with a potential range of 740¢ to 1000¢ during the usual seasonal spring trough and winter peak. Annual forecasts for the ESTLI for 2021 and 2022 remain robust at 852¢ and 866¢/kg cwt, respectively. 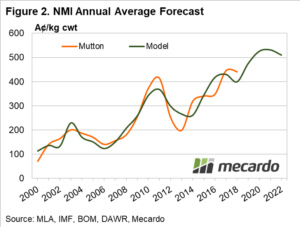 National Mutton Indicator modelling shows similarly strong predictions for the next four years with the forecast tool indicating an annual average NMI remaining above 500¢ for the 2020 to 2022 period (Figure 2). The 2020 season is expected to see an annual NMI of 525¢, with a potential range of 405¢ to 640¢ from the seasonal trough to peak during the year. The NMI for 2021 is expected to average 531¢, easing to 510¢ for the 2022 season.

A key driver for the robust pricing scenarios presented in both the ESTLI and NMI forecast models is the expected continued steady growth in demand for sheepmeat, particularly from China. Current modelling does not consider a potential surge in sheepmeat demand in the coming seasons, as Chinese consumers attempt to fill the widening protein vacuum caused by the ongoing African Swine Fever epidemic impacting the Chinese pork sector. 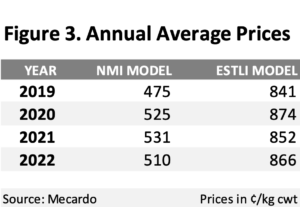 Alternatively, ongoing trade tensions between the USA and China could see GDP growth forecasts downgraded. Significantly lower per capita GDP growth levels in China and the USA as a result of trade hostilities could hamper sheepmeat demand and see softer than forecast prices, wiping 100¢-150¢ off the annual average forecast prices to 2022.