Every quarter the Australian Bureau of Statistics survey retail meat prices as part of the construction of the Consumer Price Index.  Meat and Livestock Australia (MLA) have a formula for converting the numbers from the indices into average retail prices.  Given the levels of saleyard lamb prices in the June quarter, it should come as no surprise to see that at a retail level, lamb has never been more expensive. 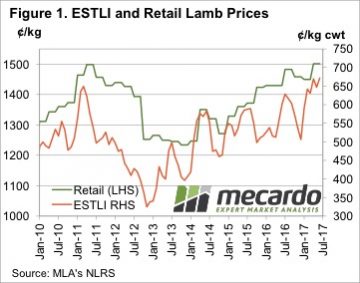 The sharp rise in saleyard and over the hooks lamb prices in the first half of 2017 took a while to translate into strong retail lamb prices, but it did eventually push them to a record.  The average retail lamb price increased 51.77¢, or 3.6%, to move to 1501.37¢/kg rwt.

The retail lamb price in the June quarter sat 4.2% above the same time last year.  This was dwarfed by the increase in saleyard lamb prices.  During the June quarter in 2017, the Eastern States Trade Lamb Indicator (ESTLI) averaged 106¢/kg cwt higher than 2016.  This equated to a 19% rise, so we can see that obviously the rise in saleyard values has not been fully passed on to retail values.

However, things were not as bad as they have been in the June quarter for retailers.  For the two years from July 2013 to June 2015 retail lamb prices averaged a premium to the ESTLI of 792¢/kg (figure 2).  In the June quarter this year the premium was 839¢.

During the very strong price period in early 2011 retail lamb prices didn’t quite break the $15 mark, pulling up at 1498.47¢ in the June quarter.  During this period there were reports that the high retail prices were impacting lamb consumption at domestic and export level, and we subsequently saw a sharp fall in lamb prices. 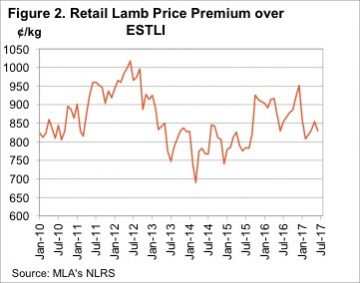 Things are a bit different this time.  Obviously in real terms lamb remains cheaper than it was in 2011, and compared to its main red meat competitor it is not yet in the expensive range.  Figure 3 shows retail beef prices remained strong in the June quarter, and despite the rise in lamb values, beef it still at a 22% premium.  In 2011 the beef premium shrunk to just 4%, and this put considerable pressure on lamb demand.

At this stage it looks unlikely that we’ll see a push back from consumer level to record high retail lamb prices, given that it is still competitive relative to beef, and the margin to saleyard values is still well above levels we’ve seen in the past. 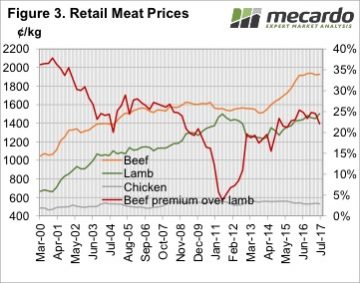 There remains some concern in the expensive red meat prices relative to static cheap chicken prices, and this is being borne out in consumption levels.

The issue will come when lamb supply recovers, and this extra meat has to find a market.  If export market can’t take it we might see lamb prices ease at retail and then saleyard level in order to claw back some market share from the white meats.