Another week, and more of the same for lamb prices. While lamb producers should be happy that they’re not trying to sell cattle at the moment, many are still thinking about the prices they didn’t lock in earlier in the year, as prices drift along the same path as last year.

Since January lamb prices have been up and down. They are still better than last year but are following a similar trend and easing from January levels. Forward pricing has generally been anticipating a price rise at some stage, but it is yet to eventuate.

As outlined in our article earlier this week, lamb supply has been surprisingly strong and sheep supply has easily outstripped last year’s levels. Supply is keeping a lid on prices but, as we know, strong demand means prices have never been this strong at this time of year (Figure 1). 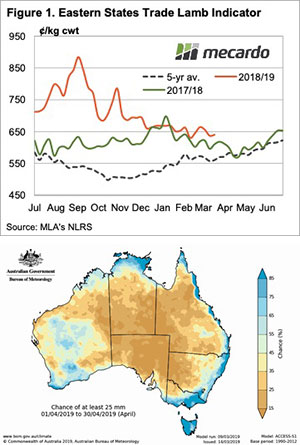 The only reason to really be disappointed with prices is if lambs were bought and fed. Selling these in the current market is likely to have resulted in a loss. Homegrown lambs have never made better money in March.

There is a little cause for optimism on the price front, however. The Bureau of Meteorology (BOM) is forecasting around a 50% chance of most of Victoria and NSW receiving median rainfall. Another way of looking at this is shown in figure 2. It shows the chance of getting 25mm in April. It’s pretty good for a lot of sheep country, if we raise it to 50mm, there is a lot less blue and a lot more brown.

We received more correspondence this week regarding flocks consisting of fewer ewes having lower scanning rates. Again, we saw this last year and it really came home to markets from July through to September. Unfortunately to take advantage of high prices, lambs either have to be very late or very early.

What we do know is that those with the ability to carry lambs through winter, or get them up to weight early, will see some handsome payoffs.