An overall satisfactory wool sale result this week, however we need to acknowledge that the weaker A$ played a part. Last week the A$ touched out at US$0.80, whereas this week it closed at US$0.782. Causes for currency moves are varied and debatable, and we can’t be sure if the weakness in the A$ is anticipating a Tigers/Crows win or loss in the AFL; or perhaps it is due to the struggle NSW NRL fans are having coming to terms with a Cowboys/Storm final? 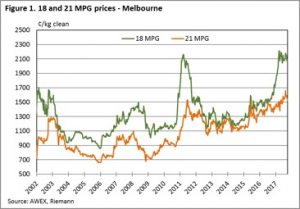 For the 18 MPG, this rally first broached 2,000 cents in March this year, while the 21 MPG found the 1,500-cent benchmark earlier in July last year.

On the other hand, while the 21 MPG also had a good period in 2011, it managed to first break the 1,500 cents level this rally in July last year. 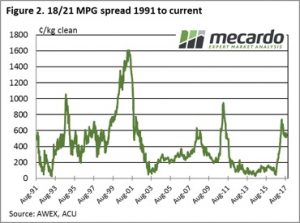 Of course, this leads to comparisons of relative price levels. Figure 2 shows the basis or spread between the 18 & 21 MPG’s for the Southern selling region. Currently the 18 over 21 MPG premium is sitting nicely at 554, having briefly touched the high level of over 700 cents in March this year.

It’s been a long wait though, while a 400-cent premium showed up in January this year, fine wool producers last received a greater than 400 cent premium over the 21 MPG in September 2011.

A total of 40,587 bales are listed for sale next week across the three selling centres. This is consistent for the next three weeks roster with around 40,000 predicted each week to be offered. 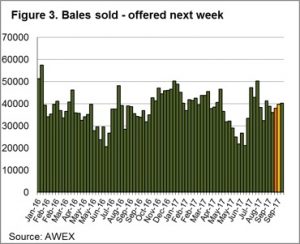 The market looks remarkably stable at present, and providing we don’t see a sudden surge in the A$ this should translate into another good week to be selling (that is providing the footy community can cope with an all Victorian result!!!)