Risk is back on the table in Australia

The Northern hemisphere is largely complete, with little in the way of uncertainty to move the markets. The focus is now on what happens locally. The risk is definitely back on the table in Australia.

In the past week, Chicago wheat futures have declined by A$7. The market overseas has largely been driven by concerns related to the corn crop in recent months. The delay in planting was expected to cause concerns with slow growth, however, benign weather has assisted. There was some scepticism of the numbers released by USDA in recent months, private crop forecasters have released figures which concur with the government forecaster estimates.

The concerns right now are related to the local crop. Overall Australia is heading towards a similar year to last, with poor growing conditions permeating.

In NSW & QLD the crop is largely finished, with very little potential even if the rainfall did land in coming months. The risk now is that there is inadequate moisture and little forecast to make a summer cropping program viable.

Jack Frost has reared his head again. In the last week, there have been reports of frost events which have caused damage in SA, VIC and WA. Although its not yet known how much damage these have caused, it remains a risk factor for the next month.

The market has started to react with the ASX gaining ground week on week. Due to production concerns there is limited growers selling at present, which has meant that consumers are switching to ASX in order to gain some cover.

In figure 1, we have plotted both the Jan 2020 & 2021 ASX wheat contract. Keep a close eye on the 2021 contract, as these both follow one another. Although we are having a second bad year (three for some), we have no idea what next season will bring. If the market rallies further, it is worthwhile taking some cover for the following season. 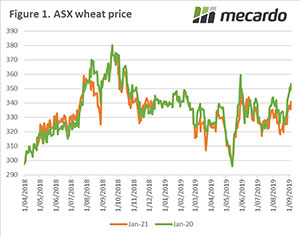 The USDA will release the September WASDE report next week. The key focus will be on any amendments to US corn.

There are many agronomists advising to cut crops for hay throughout Victoria. It is important to think this through carefully as hay prices may not be as high as last season.