WA prospects on the rise

Improving prospects in WA contrast the continued dry weather in the east. Markets are reacting as would be expected, with confidence in the NSW crop starting to wane. Internationally, last week’s gains have been given back and east coast markets are still taking some notice.

WA’s rain for the month to date, combined with next week’s forecast, will see many cropping areas hit their June average.  While APW Multigrade prices in the west are not far off the highs seen at the start of the month, the improving prospects in the West have seen basis to CBOT weaken.

WA port prices for new crop wheat are currently in the $310-320/t range, and it’s not far off being priced into northern NSW and Queensland markets.

ASX wheat weakened a little this week, falling back to $334 from a high of $350/t earlier this week.  The fall has been largely in line with an easing CBOT, which yesterday settled at $285/t for Dec-19. 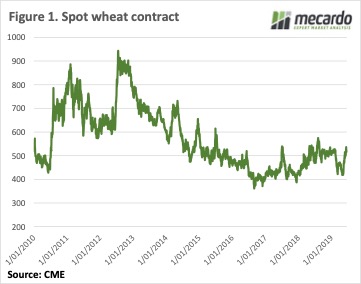 CBOT wheat bumped up against a ceiling at 550¢/bu. Figure 1 shows that 550¢ has been a solid resistance level since 2015. It is going to be hard for CBOT to move much higher without some issues with the Black Sea spring crop, or a serious push from corn.

New crop Canola prices have shown some more strength this week. The Geelong quote is at a new high of $587/t, which is a solid premium to old crop. Export demand seems to be holding new crop Canola at levels higher than old crop. It’s an odd conundrum that this years’ supply falling below an exportable surplus saw prices fall. We might see it again if ABARES forecasts are to be believed.

Local wheat markets seem to be comfortable with southern states producing an exportable surplus of cereals. This is keeping a lid on ASX basis for the time being. Grain prices are still high in northern NSW and Queensland, with southern states simply at the freight difference.

If and when it does rain in NSW, it might be more a case of the north/south spread narrowing rather than ASX prices, which are currently priced in the south, moving lower.