The bulk of the world’s wheat crop is produced in the northern hemisphere, if something goes wrong there it can have a colossal impact upon pricing. Overnight the USDA released their July WASDE report. In this week’s comment, we will look at who the winners and losers were.

The overall picture for wheat is shown in figure 1. In the coming season production and stocks are expected to be at record highs. World production is however down 9.3mmt, and big chunks of the reduction are coming from export states. 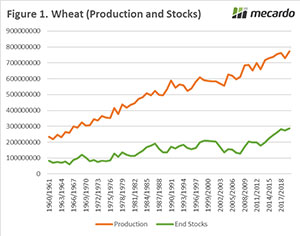 This has resulted in the futures market posting solid gains overnight (A$7.80), which will likely flow through to local prices today.

In producing the WASDE report, the USDA have continued to use the acreage figures from the heavily disputed June acreage report (see here). As they will be resurveying the US producers over the coming month, it largely means that corn supply figures will be extremely dubious until the next USDA update. Although most traders and analysts will be making their own assumptions on the acreage planted to corn, there is still likely to be fireworks when more legitimate data is released.

Although anecdotal we received some promising crop news from our current EU correspondent. David Skipper, one of our trusted contacts and general manager of Tap Agri Co (Tasmanian Grain Handler) has sent us some reports back from his trip to France with the following comments:

I can confirm that the wheat, barley and canola crops are huge and in magnificent condition. The French (in the burgundy region) are now harvesting and crops are thick and heavy. I saw one wheat crop that had fallen over in some parts of the paddock.  I don’t think the French need to worry about crop yields this year. (Pictures)

The Bureau of Meteorology released their three-month outlook yesterday. It was quite bleak with drier than average conditions expected across much of the wheat belt. Long range weather forecasts at times have to be taken with a pinch of salt, however it remains concerning.

What does it mean/next week?:
The market in Australia is likely to see a rebound as it digests both the rise in overseas futures and the prospect of dry weather over the next three months.