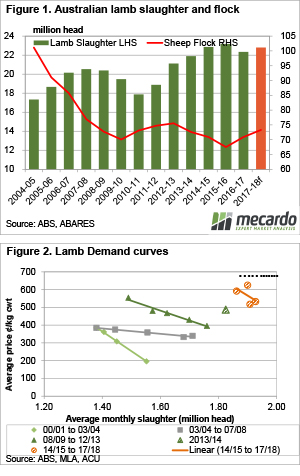 The Australian Bureau of Agricultural and Resource Economics (ABARES) have put out their quarterly Agricultural Commodities Report, and amongst the numbers there were some interesting sheep and lamb forecasts.  This week we take a look at whether lamb prices can achieve another year on year increase, as predicted by ABARES.

ABARES are expecting a solid jump in the sheep flock this financial year, with the June 30 2018 flock pegged at 73.2 million head.  A flock of just above 73 million head would be a 3.2% increase on the June 2017 numbers, on the back of a 5% increase over the last year (figure 1).

ABARES expect the stronger flock to translate into stronger lamb slaughter.  Figure 1 shows that 2016-17 slaughter was at a three year low, but is expected to increase 2%, to almost match the 2014-15 lamb slaughter number.

Normally a forecast of a larger flock, and higher slaughter, would be accompanied by a lower price forecast.  ABARES are actually expecting lamb prices to rise, with the average for 17/18 to post a 5.6% increase to set a new record high of 625¢/kg cwt.

Figure 2 shows how lamb slaughter and financial year average prices have been related over recent years.  Demand has been increasing regularly, but the 16-17 price rise was due to tighter supply, not increased demand.

If ABARES slaughter forecast is correct, we’ll have to see demand increase to reach an annual average of 625¢/kg cwt.  Back in 14-15, when lamb slaughter was similar to that forecast for the coming year, prices were back at 518¢/kg cwt.

If lamb prices average 625¢ in 2017-18 it will be a great year for lamb growers.  Normally the Eastern States Trade Lamb Indicator (ESTLI) ranges around 75¢ around the average. The ABARES forecast would see the ESTLI reach highs of 700¢, and lows of 550¢, which is great money during the peak supply period.

Unfortunately we think the ABARES forecast might be a bit strong, and prices might average a bit lower.  We have however seen solid price resilience so far this spring in the face of increasing slaughter, so perhaps demand is stronger. Though it’s unlikely to be strong enough to counteract the higher slaughter rates forecast by ABARES.