Committed to the bear (for now)

Speculation tends to get a bad rap, however, it provides the liquidity to ensure that grain markets operate correctly.

The commitment of traders (COT) report is a weekly report produced by the US Commodity Futures Trading Commission. The report is released every Friday and is based on the closing position of traders on the close of trade on Tuesday.

The purpose of the report is to provide an insight into the sentiment of the market and where different market participants are trading. When 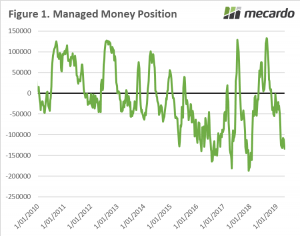 using a futures contract, it is either a long (buy) or short (sell) position.

In the COT report, trader’s positions for contracts are compiled and the area of most interest is where the overall position of speculators lie. The simplest explanation of how to interpret the positions is below: 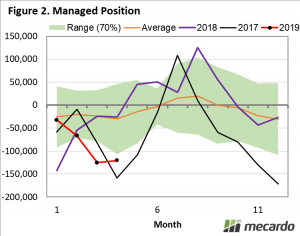 We all know that speculators bring a huge volume of liquidity into the market and for better or worse they provide the ability to easily trade in and out of positions.

The current position for managed money (or speculators) is shown in Figure 1. This represents the combined position of Chicago, Kansas and Minneapolis wheat. The combined managed money short by 134234 contracts. This means that managed money is currently bearish on the market.

As we can see this bearish slide started in January and has been almost relentless, as global crops started to look promising. It is important to examine the seasonality of the sentiment, which is shown in figure 2.
In this chart, we can see that the current sentiment is extremely bearish compared to typically experienced at this point of the year. It is clear that seasonally the middle of the year is where the speculative money turns bullish. This tends to occur as any crop concerns start to develop.

At present, the speculators in the market are very short. However, if we see the release of bullish data, their sentiment can change rapidly.

With the advent of algorithmic trading, it is possible that there can be overcorrections where the market makes substantial movements as traders attempt to close their positions to curb their losses.