Crop update around the world The 2nd quarter of the year is the most important part of the year for world grain production. During this period of time, the major growth phase of the northern hemisphere crop will develop. This can lead to volatility in pricing as the Northern Hemisphere will largely determine pricing for the remainder of the year. In this weeks’ comment we will take a look at some of the forecasts for the major production areas.

The Australian crop is forecast by ABARES at 23.9mmt, however at this point of the year it is a meaningless figure. The variables required to accurately predict the crop with any degree of accuracy are inherently volatile until the post-seeding period.

Russia
In the late 80’s/ early 90’s Russia was an Insignificant participant in the grain export trade. In the early post-Soviet period, Russia would import up to 15mmt. The introduction of foreign investment and techniques has led to Russia becoming the number one exporter at >40mmt (figure 1).

Therefore, the influence of Russia on global supply cannot be underestimated. This seasons’ estimates for the crop are very positive, with the Russian agricultural ministry forecasting 75-78mmt of wheat. This would be the 2nd highest wheat crops the nation has produced. If this is realized, it will likely help maintain a ceiling on global pricing.

Europe
The European trading bloc has produced on average 138mmt of wheat since the start of the century. There have been large tracts of the European growing area which have been unseasonably dry during March. However favorable moisture profiles in the main production areas in France and Germany are likely to lead to production of 149-154mmt.

United States
The United states have experienced their worst flooding in history during March. This has resulted in the loss of a substantial quantities of stored corn and soybeans. The majority of states are showing considerably improved conditions from this time last year.

Although conditions are still close to optimal the excess moisture has the capacity to reduce the potential of the winter crop, conversely it provides great starting moisture for the spring crop.

What does it mean.

We’re heading into the seeding period within Australia and all eyes will remain on weather, and more particularly the timing of the Autumn break. As outlined above, at this time in the season all predictions of crop size must be taken with a grain of salt until the situation post seeding becomes clearer. The best you can do at the moment is keep your eyes on the skies. 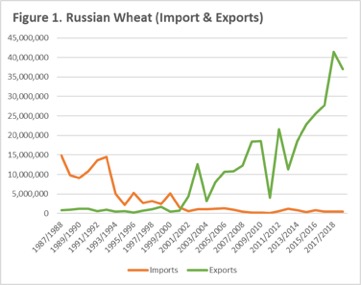