The market has been assisted in recent weeks by the high levels of uncertainty. This week the wheat price has fallen, albeit remains strong. 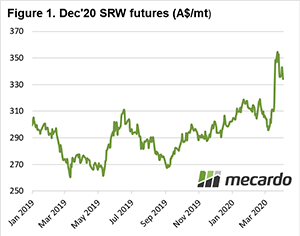 Let’s start this weeks’ commentary on a global level. The price of a December CBOT wheat contract has fallen dramatically in the past week. On the 25th March the contract was trading at A$352, it has now fallen to A$334. A fall of A$18 is considerable, however it has to be noted that it had risen A$51 during the preceding ten trading days (figure 1).

In Australian dollar terms the futures have lost some ground as our dollar increased from 55¢ to 60-62¢. A higher dollar reduces the price on an Australian denominated swap.

Fundamentally the wheat market is relatively bearish, however, the uncertainty caused by COVID-19 and the associated government interventions can add a huge amount of volatility. Here are a few reasons for movements lower in wheat:

In reality, the market has bearish tones, and if it were not for COVID-19 the pricing levels would likely be substantially lower than they are at present.