Futures and FX going against us 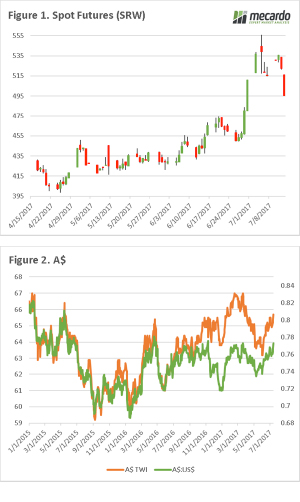 This week we saw the USDA release their July World Agricultural Supply and Demand estimates, the market has reacted to this news. In this update, we take a short look at Chicago futures & the dollar.

The last two sessions in the wheat market have been in the red (figure 1). The market has been on a skyward journey over the past two weeks, however it came to an end when the USDA report came out. The WASDE report was bearish with world stocks up 1.62mmt.

This bearish report, alongside welcome rains in the US has spooked the speculators in the market. However, the SRW futures falling should not be much of a surprise, as the world issues are largely around quality not quantity. It must be noted that we typically expect any falls in production to have a 2-month lag before appearing in the WASDE report. Therefore, the August report might provide some fireworks.

To add insult to injury, the AUD has reached four-month highs (figure 2), barrelling above 77¢. This makes our wheat more expensive to export. The AUD has gained value after better than expected Chinese trade data, and remarks from the US Fed Reserve that interest rates in the US may not be as soon or as frequent as expected.

Next Week/ What does it mean?

The commitment of trader’s report will give an indication into how the speculators in the market are positioned, and we would expect them to have reduced their long positions.

There will be another weekly crop report released, and we would expect the spring crop ratings to be reduced. Although at this time of year, a large degree of quality risk will already be priced in.