Those familiar with the movie ‘Braveheart’ will recall the scene where Mel Gibson and co are facing a cavalry charge from the English Army. Mel said ‘Hold, hold, hold, now!” and the Scottish rebel impaled the English horses on spears and subsequently won the battle. It’s a weak analogy, but with Victorian lamb producers facing encroaching dry conditions, they have held, and held, and held, until this week they raised their spears, but were themselves impaled. Metaphorically, not literally. 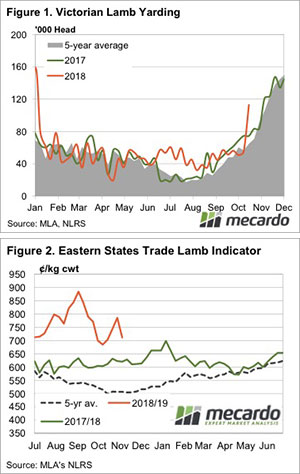 After Matt’s article last week, and earlier this week, looking at Victorian lamb yardings, or lack thereof, this week the lambs appeared (Figure 1). The lift in supply was felt across all yards, with Naracoorte in South East South Australia also seeing a big rise.

With plenty of lambs and sheep seemingly booked in over the hooks, prices tanked sharply. Normally we don’t see Victorian lamb yardings over 100,000 head for another month and so processors definitely didn’t have the space to kill them.

When supply overwhelms demand, prices fall. Although, there was some good news. The Eastern States Trade Lamb Indicator (ESTLI) fell 77¢ but only back to the levels seen three weeks ago. Processors and restockers were happy to buy lambs at the lower levels, even if they weren’t to be killed this week.

The high prices of the last couple of weeks, along with dry weather, encouraged growers to offload lambs this week. The test will be whether supply continues to flow, or if it pulls back with lower prices. The Melbourne Cup usually sees lower yardings next Tuesday, so we might not get a real indication until the following week. The relatively strong prices in the face of heavy supply are encouraging, however, at least for well-finished lambs.