Posted at 14:16h in Cattle, Sheep by StockCo
Share


The harvest is all but done, now is the time to start looking towards next year. There will be changes in planting, a little more of this and a little less of that. However, regardless of what you plant you will be burning diesel and spreading fertilizer. In this report, we look at these two important inputs.

In the last two months’ millions of litres of diesel
will have been burnt across the grain growing regions
of Australia, and in reality, we are only a few months 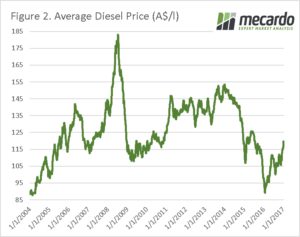 away from starting all over again with seeding and
the diesel bills will start flowing in. In figure 1,
the average port diesel price for Australia is
displayed since the start of 2015. Assuming that
most farmers purchased their fuel well in advance
of harvest as recommended by Mecardo early in 2016,
the input costs for fuel for the 2016/17 harvest
will be considerably lower than current levels.

The average diesel price for Aug/Nov was A$106/l,
versus A$116/l for the past month. Although diesel is
creeping back up diesel prices have spent a lot of the
last ten years above current levels (figure 2). In late 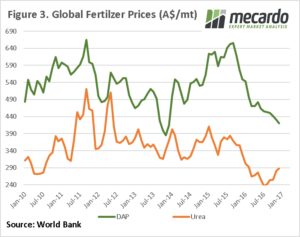 December OPEC agreed for the first time in eight
years to cut oil production, which alongside improving
economic conditions has led to an increase in crude
oil prices and therefore diesel. The market for oil is
hard to predict and in coming months it is important
to keep a close eye on the market with a view to
locking in fuel for the coming season either through
swaps or fuel contracts.

The picture is rosier when it comes to fertilizer. In
figure 3, we can see that both DAP and Urea are both
pricing at good levels since the start of the decade.
Although Urea has seen an uptick in past months, the
outlook for fertilizer supply still points to a surplus for
at least the next two to three years. The supply issue
aside the real risk is a fall in the A$ increasing the
cost of imports.

The fertilizer market remains at low levels; however,
the market outlook remains bearish to neutral reducing
the impetus to go out straight away and stock up.

In terms of fuel the outlook is less certain, and looking in
a proportion of fuel requirements in advance could be an
advisable risk management strategy.