The wider world has seen wheat markets fall since the start of the year. Forecasts for the coming global crop look positive, which if realized will result in prices remaining low. However in Australia we are currently insulated from factors overseas. 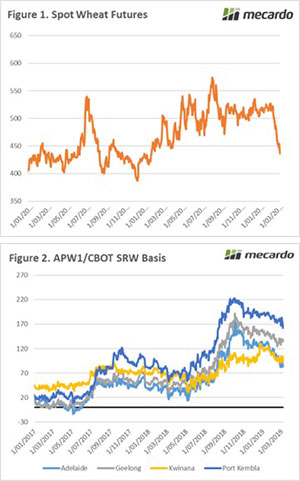 Since the start of February the wheat market has been at the mercy of gravity. On Wednesday the market gained some ground on a short rally, however it was short-lived with futures levels falling back to 11-month lows (figure 1).

The export pace from the US has been sluggish with their pricing uncompetitive versus other origins. At the current pace it is unlikely that the forecasts by the USDA will be met prior to the new marketing season – unless record shipments are made in the next three months.

At a local level, basis levels have fallen however remain at relatively strong levels. The ‘basis’ component of a price can be simplified down to the difference between the local price and the price of a futures contract. This basis can either be negative or positive. In recent years the range has been wide with the majority of the country close to A$20 over CBOT in early 2017. The past six months has seen basis rise dramatically which has insulated local pricing from the wider world.

Many factors impact the basis level such as grower selling, domestic supply & freight costs. The basis strength this year is due to domestic supply being reduced due to drought and consumers being required to pay higher values to ensure that grain is not exported. As we move into the new season, the conditions in the next six months will determine if basis returns back to normal levels.

The WASDE report will be released overnight, it is unlikely that there will be much in the way of surprises.

The real drivers in our market will come from consumers deciding if they are concerned about the recent BOM projections and whether they want to remove their price risk for the coming harvest.