Some thoughts on the removal of the South Australian GM moratorium The South Australian government after 15 years has finally decided to scrap its moratorium on the cultivation of GM crops. The Mecardo team were instrumental in providing analytics to assist in the decision-making process. In this update, we examine the spread between GM and Non-GM and provide some thoughts for growers considering GM canola in South Australia next year.

We produced an in-depth report in early 2018, ‘Analysis of price premiums under the South Australian GM moratorium’. This report was used by Grain Producers South Australia to lobby for the removal of the GM moratorium and led to further independent reports by Emeritus Professor Kym Anderson.

The summary of our reporting was that there was no evidence of the GM moratorium providing a premium for most farmers in South Australia. In my view farmers should be given the choice to use whatever tools they need to be as productive as possible. The 2020/21 season will be the first-time farmers in South Australia will be able to utilise genetically modified crops.

This makes an opportune time to examine GM spreads around the country. It will come as no surprise, but GM canola trades at a discount to non-GM varieties. What is important is how much of a discount that it trades at. 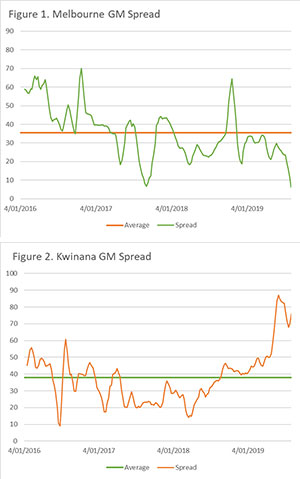 The spread between GM and Non-GM and is quite volatile with a lot of movement within the season. It is therefore worthwhile keeping a strong eye on the spread, however the overall return is far more important in reality.

One factor to understand in the early stages of the introduction will be the volume overall produced. If we look at the overall volumes typically grown to GM varieties (see GM Crops: How has the Australian farmer embraced them?), it typically ranges around 10-15% in NSW & Victoria. I would expect similar levels in South Australia within a few years.

South Australia has produced around 334kmt of Canola since the turn of the decade. If we take the top end of the range, there will be 50kmt of Canola produced. This will be spread on a wide geography from the limestone coast to the Eyre peninsular.

This makes it very difficult in the initial stages to develop a market as there will be difficulty achieving volumes for bulk. It may end up that the Eyre peninsular will end up shipping out individual holds, whilst the eastern parts of the state may end up mainly utilizing container trade or the domestic market in Victoria.

I recommend that farming representative groups (such as GPSA) work closely with industry to ensure an orderly approach to the marketing and logistics of GM canola in South Australia.

The early stages of the introduction of GM canola will have its ups and downs, however, it is great to see farmers having all the agronomics tools available to them. This will be especially important as new varieties are released such as omega oil canola.

It is important to get some independent advice from your agronomist in order to gain a monetary value of any agronomic benefits (which may not all occur in year 1). This will determine whether the spread between GM and Non-GM is acceptable.