The grain market is not only steered by agricultural factors, many of the driving forces behind price movements are out with the industry. In this weeks grain comment we look at how sausages, coal and interest rates can have an impact on our industry.

In yesterday’s grain analysis “Don’t get caught in the basis bubble”, I discussed the issues around overseas values plummeting. Overnight there was a small correction, albeit remaining very close to contract lows. 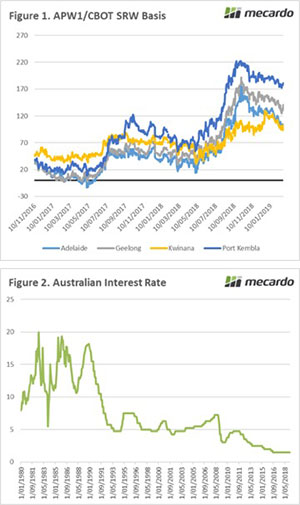 In figure 1, the APW1/CBOT basis is displayed from 2016 to present. As we can see our premium over Chicago increased dramatically during the second half of last year as drought bit hard. These level smashed all prior records.

As we can see, the basis level has dropped dramatically in the post-harvest period. If we get an average harvest the basis level will converge back with new crop pricing; at a level closer to historical ranges. The basis has saved our pricing, but there is limited chance of these levels being around during harvest (unless we have a drought).

It’s clearly not a great idea to insult the countries most important trading partner. There are rumors that this comment and festering tensions could lead to barley being impacted with an anti-dumping tariff in the coming month.

It is reported that the port of Dalian has banned imports of Australian coal which could be a symptom of deteriorating trade relations. The A$ dollar was under some pressure as the market digested the information. At present Dalian only receives <2% of Australian coal exports, however coal exports remain Australia’s most valuable export, and contagion to other ports would have a dramatic negative impact on the economy.

A reduction in interest rates will lead to a fall in the A$ which will benefit exports but will increase the cost of our import requirements. If the rates are passed on, it will provide cheap money for investment purposes.

The world looks towards the northern hemisphere weather. At present conditions are good, and in places excellent.

However there is still ample time for disasters to occur.