After two months of almost continual declines, this week saw a strong rebound on profit-taking by short sellers. On Tuesday the Chicago market in A$/mt rose 5% or $11. The market was very short and the risks will now start to increase as the growing period progresses.

The volatile northern hemisphere market should now start to ramp up. The current outlook is reasonably favourable for the global crop, however, all that could change between now and August. Any bad news will be likely to see huge reactions, which will potentially provide pricing opportunities. 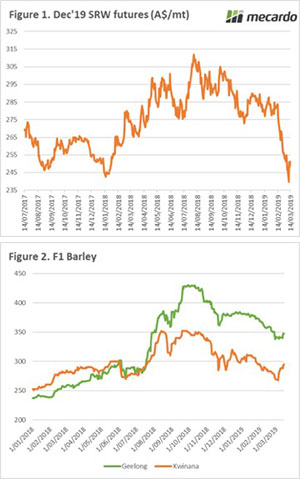 The Chinese government are yet to announce the result of their anti-dumping investigation, leaving us all on tenterhooks. In January barley exports to China were down 58%  compared to December, signifying de-risking by traders to avoid any potential un-costed tariffs/deposits.

However, pricing for feed barley has improved strongly in Western Australia (Kwinana) rising from $268 at the start of the month to $295 yesterday, back to levels in late January. Although according to sources in WA, there is little unsold by producers, it’s a good time to consider offloading old crop.

The BOM released their updated three-month rainfall projection yesterday. Although these projections can be highly dubious due to the nature of predicting weather events, they do point towards the majority of the country receiving median rainfall during the period April-June. Let’s hope they are wrong and we experience above average rainfall for this period and beyond!

Will the funds continue to close their short positions, or will we see a bearish tone descend back on the market?