04 Sep The word in the west

This week I was lucky to get the opportunity to travel to the west coast to talk to producers and stakeholders within the industry. In this week’s comment I’ll cover the big talking points in the west.

It’s a tale of two wheat markets at present, with overseas and local futures diverging from one another. Chicago wheat futures for December are largely unchanged at A$258/mt, however, during the past week we have seen a rise in ASX futures from A$325/mt to A$342/mt.

At the moment Australia is on a knife-edge with the BOM releasing a negative rainfall outlook for the coming weeks. Whilst Victoria and South Australia are in reasonable shape, New South Wales has little hope left and this forecast is the nail in the coffin.

In the west, the crop is not looking anywhere near as good as last year, with canola crops looking in very poor shape. The rainfall over the past day and tomorrow will help provide a boost, but more will be needed by the middle of September – especially if they continue to have record breaking heat.

Last year the east coast relied on Western Australia to meet the domestic demand and it is likely that there may be transshipments again into NNSW/QLD.

Whilst at the Dowerin field day, we had a good chance to find out what was on the minds of the industry:

Agricultural Produce Commission: There is a lot of concern about the introduction of a levy to create a broadacre research fund. This levy is already in place in South Australia through GPSA. At a time when membership of local representative bodies is in decline, this levy has some merits for ensuring grower centric research.

I personally wouldn’t be in favour of this levy, however the fact that it is opt-out means that growers can elect whether they want to contribute.

CBH: There was a lot of discussions related to CBH at the field day. The major talking point from growers was the $43m interest free loan to their joint venture flour mill in Indonesia. There is a lot of concern that this type of deal isn’t in the best interest of grower shareholders.

The trade participants who I spoke to were all talking about the A$200m trading loss which CBH are rumoured to have made this season.  There were many calling for the CBH trading business to be completely separated from the storage and handling business.

WAF-PGA merger: These two organisations have at times had oppositional viewpoints on several topics, but every couple of years the idea of a merger is debated. It would make some logical sense to have a single organization which represents producers, but in reality, I think these organisations are ideologically opposed and a merger will be forever out of reach. 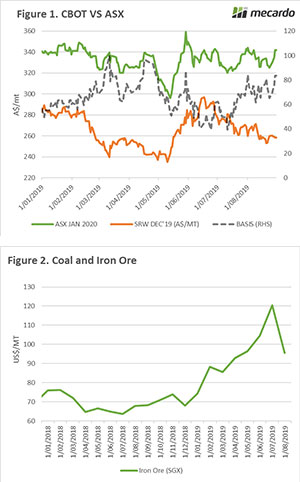 On the topic of WA, the state’s biggest commodity (iron ore) has taken a substantial hit over the past month (figure 2) as a result of trade woes due to US-China tensions. Historically iron ore has been a driver of the AUD, this fall could lead to the continuation of the current weakness against the USD.

Although we all know that commodities go through boom and bust cycles, we are likely to see ore rebound in future – it might even make those Karratha property investments profitable one day.

At present, there are continuing concerns over the east coast crop which will keep interest in the ASX strong as consumers aim to get some cover for the following year.

On the futures front, it is rare to see rises in the market from August onwards, as the bulk of the world’s crop is a certainty. However, this year with concerns that the USDA may have overstated the corn crop and its slow growth could lead to surprises.