Will falling wool prices be the end of the wether

Wool prices are crashing, and while still historically strong, yesterday hitting one and a half and two and a half year lows for the 19 and 21MPG’s respectively. The wether flock was already falling, here we take a look at how lower wool and strong sheepmeat prices might see further declines in wether flocks.

Figure 1 shows the decline in ‘Sheep other than Ewes’, with the new low hit in June 2018 of 8.7 million head. It’s not just a function of the declining flock, with the proportion of adult sheep falling from 22% to 18% over the last five years. 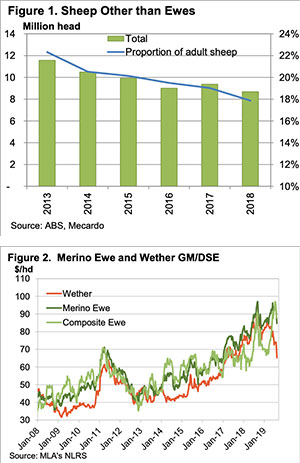 Strong wool prices were threatening to see the wether flock steady or grow when seasonal conditions allowed. But the latest fall in wool prices, combined with strong sheepmeat prices, might see wether numbers continue to decline.

Composite ewes are another alternative to Merino Wethers, and Ewes for that matter.  We can run a gross margin per DSE calculation for them too. Production assumptions are 4kgs of 32 micron wool, 1.25 lambs at 15.4kgs cwt (35kg lwt) and a DSE rating of 2.

The latest fall in wool prices and strong lamb prices has composite ewes, back at the top of the table, but only marginally, making $3 more per DSE.

Despite a lower cost of production, it’s hard to see the wether flock growing with such a divide in the value of outputs. Wether gross margins per DSE are now further behind Merino and Composite Ewes than they have been at any time over the last ten years.

With strong sheepmeat prices unlikely to go away and plenty of uncertainty in wool markets, there might be more wethers headed to the market once they are shorn this year. We can expect a new low for ‘Sheep other than Ewes’ in the coming year, both in absolute numbers and as a proportion of the flock.